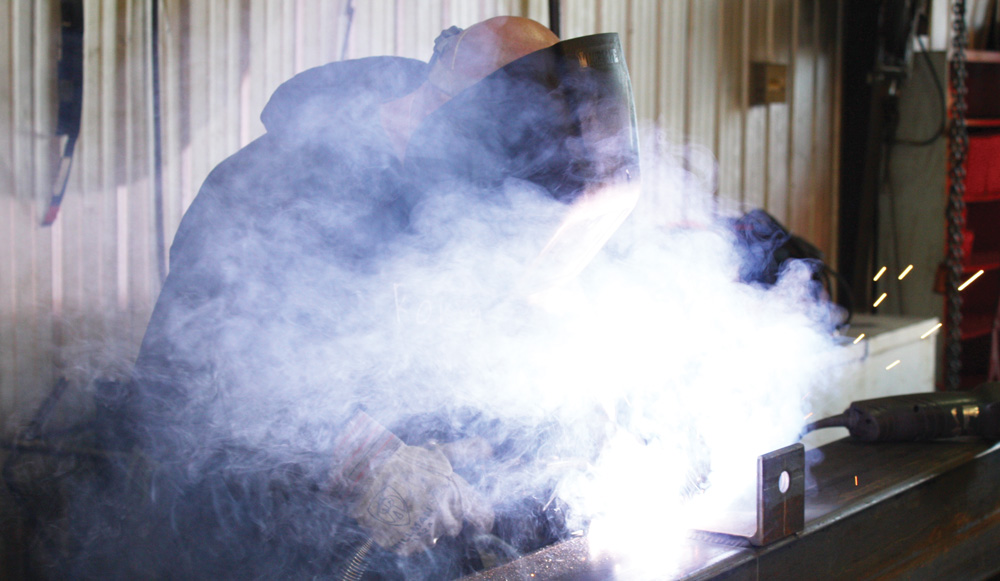 It is widely known that lead is a hazardous chemical, and many are wary of its presence in paint and pipes. But most people would probably be surprised to learn that the maximum recommended exposure limit for lead is higher than that for another metal called manganese. For the vast majority of people, the presence of manganese in our food, water, and air in trace amounts is actually important for good health. But people in professions like welding can be exposed to concentrations of manganese up to 1 million times higher than normal.

This extreme exposure to manganese has serious consequences, such as brain inflammation and motor problems, like tremors, slowness of movement, and weakness. A recent study in Parkinsonism and Related Disorders may point to a reason.

Researchers from the University of Washington, Seattle (UW) and Washington University in St. Louis School of Medicine (WUSTL) sought to figure out how this high exposure to manganese causes brain inflammation and motor problems. To do this, they focused on the gene for a molecule thought to be involved in brain inflammation, called NOS2. Lead author of the study Susan Searles Nielsen, from the Department of Neurology at UW and WUSTL, explained that manganese might be changing the rate at which the NOS2 gene makes its molecule. Normally, groups of elements, called methyl groups, are attached to NOS2 like handcuffs – the methyl groups do not change the gene, but they prevent it from making many molecules. This process of adding methyl groups is called methylation. When a lot of manganese gets into the system, there is much less methylation; it is like the handcuffs have been removed.

Previously, researchers had not known exactly how the manganese exposure was leading to such a high prevalence of motor problems in welders, but these new results identify one possible explanation. “There is some evidence in this study and others that… metal particulates increase expression of [NOS2] by reducing methylation,” Nielsen explained.

These results are highly concerning for the welfare of welders, but beyond that, Nielsen continues, even those “who work around welding fume, not just welders themselves, may be receiving enough particulate exposure to affect methylation of the gene.”

This startling realization means there is even more reason to be concerned about workers exposed to welding fumes. It is incredibly easy to exceed the recommended manganese limit, explains Jeff Jackson, Senior Industrial Hygienist with Oregon Occupational Safety and Health Administration (OSHA). “If you weld for about 45 minutes, you’re over that standard.”

Given this high level of risk, welders should be concerned. However, “in the welding industry, they get indoctrinated to this old-school mentality,” Jackson continued. “How do you have leverage with employees that don’t have a high concern for chemical exposure?”

Without workers being concerned for their own safety, the last line of defense comes from groups like OSHA and the American Conference of Governmental Industrial Hygienists (ACGIH). While the ACGIH has steadily lowered its recommended exposure limit to manganese, most recently by 10 times in 2013, it has no regulatory power. OSHA, which does have regulatory power, adopted their manganese standard in 1970, and it remains unchanged. The OSHA permissible exposure limit is currently 250 times higher than what the ACGIH recommends.

Unfortunately, the OSHA standard is unlikely to change soon. “It takes many years to pass a new standard,” explained David Michaels, Assistant Secretary of Labor for OSHA, to NBC news. “The result is that many workers in U.S. workplaces are not adequately protected.” Jackson clarifies the problem further, “It’s really tough politically. [Employers] know that OSHA is not going to be able to do anything.”

In the face of the “old-school mentality” of welders and the “many years” it takes to change regulations, extreme manganese exposure in welders can seem like an insurmountable problem. However, perhaps the new findings from Nielsen and colleagues can provide hope. If scientists can fully understand how manganese exposure leads to brain inflammation and motor problems, they might be able to identify ways to treat or even prevent the problems from happening in the first place.