This past weekend Seattle chose to remind us how resplendent it can be when the weather cooperates. It seemed as if everyone came out of the woodwork as if emerging from hibernation, and came out to revel in the sun. In honor of such things I thought a post on a few of my favorite of Seattle’s many wonderful parks was apropos! Thus, in that vein and in no particular order, a brief primer on some of Seattle’s best outdoor spaces (part 1!):

1. Golden Gardens
As a Ballard resident I’m a little biased in favor of Golden Gardens (and no. 2, The Locks) as they’re especially nearby, but this park is a gem no matter where you live. Located on the Puget Sound in the northwest of Seattle, Golden Gardens is the perfect place to enjoy phenomenal views of both the Olympic mountains and the sound. I could use many flowery adjectives but I think a picture (or a few) will likely do the job better. (And yes, these pictures are instagrammed but it was only in an attempt to capture how gosh darn beautiful the moments actually were. I swear.) 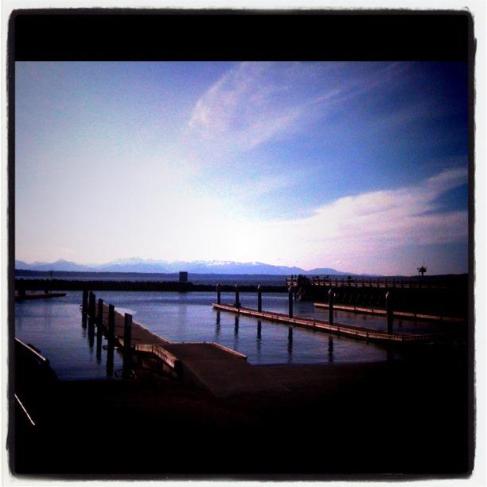 Specialties: beaches, mountain views, bonfire pits, volleyball nets, lots of cool trails in the adjacent hillside, located on a bike path, plenty of giant logs for perfect lounging, nearby paddle-boarding, & sunsets like so: 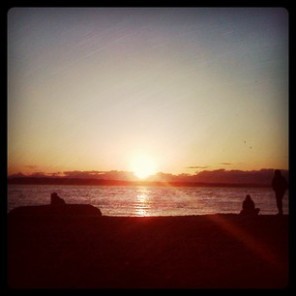 Get there…
…On the bus! There are a few routes that get you pretty close, or allow you to transfer to get all the way there: the 40 and 15 from downtown, the 44 from the University District, and others.
…On bicycle! There are bike lanes and bike paths all through Seattle, including one that goes all the way to Golden Gardens.
…By car! If you have a car you may have to fight for a spot on the loveliest of days, but there are multiple large parking lots, so don’t despair too much.

2. The (Hiram M. Chittenden) Locks
Also located in Ballard are the Locks. Now, you may not instinctively think that watching boats traverse from the lake to the sound would be all that exciting, but you would be pretty wrong. It’s really cool! Firstly, the mechanics of raising and lowering giant boats in giant-er volumes of water makes this scientist’s heart swell. Secondly, there are all sorts of other non-boat-related things to do. There is a lovely botanical garden, a cool salmon ladder, and I can personally vouch that it has some great frisbee space. Also, if you’re in a nerdier mood, they have benches-a-plenty which are perfect for an outdoor board game. Yes, I speak from personal experience. 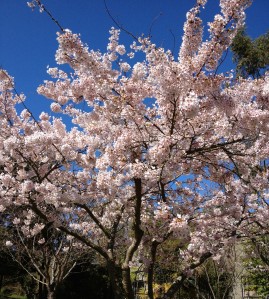 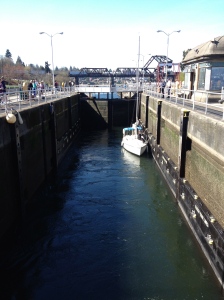 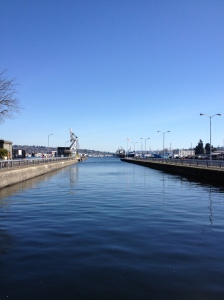 (The water level on the two sides of the locks! So cool!)

Get there…
…By bus! The 40, 44, 15, and others get within walking distance.
…By bike! On the same paved bike trail as golden gardens (the Burke-Gilman)
…By car. There is a parking lot with a rather minimal fee (but free on Sundays!)

3. Volunteer Park
One of the coolest parks in Seattle, in my personal opinion, sits right in the heart of Capitol Hill, which is a wonderfully vibrant, urban-feeling neighborhood east of downtown. One of the first times I came to Seattle a friend took me to Volunteer Park and I was so impressed by how verdant it seemed  even in the middle of winter (mind you, I was coming from a brutal east coast blizzard, but still). In addition to great green space, it has a water tower that affords spectacular views of downtown and the space needle when the weather is clear. It was a particularly blustery day in November when this picture was taken, but seeing the Space Needle over all those trees was awesome. 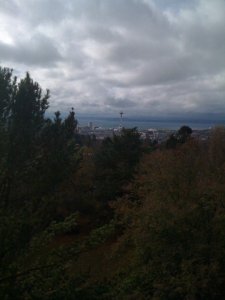 Another great aspect of Volunteer Park: a great conservatory! The sheer number of varieties of flowers, plants, cacti, and trees they have is impressive. A personal favorite includes a cactus that looks as if it had recently been a scratching post for a sheep.

Specialties: watertower with great views (and acoustics!), a conservatory with furry cacti, lush green space in the middle of the city, the Seattle Asian Art Museum (free on first Thursdays of the month!), a great reservoir, a great nearby cafe.

Get there…
…by bus! The 43 & 49 (from either downtown or the University District), and the 10 from downtown all take you right there.
…by bike! Once you’re on the hill it’s quite bikeable, but beware of seemingly short distances with steep inclines in this area.
…by foot? Depending on where you’re coming from, this one may be within walking distance.
…by car. There is street parking in and around the park, but it’s likely hard to come by on truly beautiful weekend days.

I know it’s hard to believe there could be even more, but we’re only halfway through my little list of Seattle’s best parks! Stay tuned for part 2…