The other night I went with a couple friends to dinner and a lecture. (Yes, that’s right. We’re old fogies and went to a lecture.) Anyway, after a supremely delicious meal at Mamnoon we wandered over to the Seattle Town Hall to hear James McBride speak. We ended up taking this kind of weird route that entailed much confusion and just a little bit of adventure. We wandered down (literally down a hillside) this weird, poorly lit, slippery path between apartment buildings, and then continued to have to go through alleys and possibly off-limit staircases to finally get to our destination. But after some wandering, and midway through our little adventure, I realized we were in Freeway Park!

I had been to the park before during a conference at the convention center (which abuts the park). The conference was ridiculously boring, but it was so glorious outside and I remember loving the confusing and at times Escher-like paths and stairways throughout the park. I didn’t take any pictures this time around (mostly because it was dark, and we were running late), but I have some from the first time I was there. 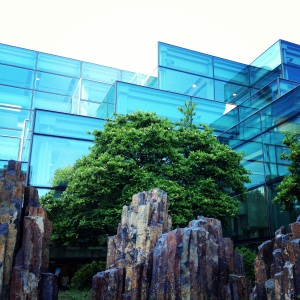 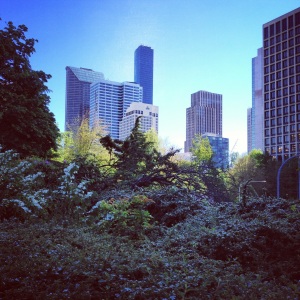 In all — I fully recommend Freeway Park, but maybe avoid the hilliest portions (at least after dark, and not in the rain!).